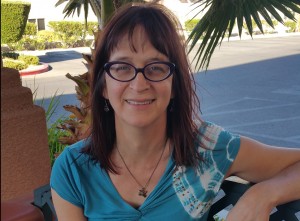 As an accidental activist and lifelong agitator, jane heenan has been a strong voice for greater dignity and justice for sex/gender diverse persons and communities in Nevada since the 1990s.  These days, they engage in the world as GJNV Director and QAVP Clinical Director, while maintaining a thriving private practice in psychotherapy.

jane’s journey to greater honesty and openness began almost 25 years ago when they first talked to their partner about wanting to make changes in their sex/gender expression to more closely fit their identity.  Along the bumpy bumpy way to greater personal integrity, jane entered graduate studies at UNLV in counseling in 1997 and began to provide therapy and facilitate groups for transgender, intersex and queer persons.  These experiences increased their self-awareness and taught them a great deal about how sex/gender diverse persons are treated in society.

Not one to take suffering lightly, jane got up and stood up to press for a queer-inclusive employment bill in 1998.  This bill – AB311 – was signed into law in 1999 including only protections in the category “sexual orientation,” teaching jane early and powerful lessons about how privilege operates in gay-lesbian communities.  After getting fired from a counseling internship in 2001 as a result of again agitating for queer inclusion in gay-lesbian spaces, jane took some years more quietly building a practice.  Still, regular contact with queer persons in therapy continued to stoke the desire to co-create inclusive change while other queer persons were growing in their capacity to act.

Finally, in 2007, jane – along with Mari Rosenberger and Jude Cox, both of whom self-identified as trans/queer – got together with persons at the National Center for Transgender Equality and National Gay and Lesbian Task Force to scheme in support of passage of employment protections for visibly queer persons.  Assemblyperson Paul Aizley agreed to sponsor our bill in the 2009, the first-ever trans/intersex/queer inclusive legislation of any kind in our Silver State’s history.  This bill – AB211 – got a committee hearing in 2009 but failed to be voted out to the full Assembly.  Following this session, a few prominent gay/lesbian community leaders acknowledged the need to build more honest bridges to include traditionally excluded queer-identified persons and groups.  From these collaborations came the historic change in 2010 in how Nevada’s DMV processed requests to change gender markers on state issued IDs.  With strong support from the Progressive Leadership Alliance of Nevada in 2011, jane and other transgender, intersex and queer persons succeeded in getting inclusive civil rights bills introduced and passed with bi-partisan support, signed by Republican governor.  This was the first time in the history of the USA that inclusive civil rights in employment, public accommodations and housing were added in a state in the same calendar year.

During the legislative session, jane began to talk about themself as a “Nevadan,” as they began to believe that they had indeed found a home.  Later in 2011, jane and others formed Gender Justice Nevada.  jane accepted this challenge to build in more formal and more organized ways after many years of playing together with many other talented and powerful queer persons as what they have called through the years a “rag tag band of trannies.”  Now, at almost 50 years old, jane has developed a strong web of healthy and sustaining relationships with sun sky moon earth trees doggies as well as human animals.  They remain committed to supporting deep awareness of who we are and how we come together as an integral part of and astonishing expression of our earth mother.  They believe in love and are a committed radical pacifist.  They have begun to cultivate a connection to anarchy and challenge the (mostly) unquestioned primacy of civilization.  They are proud to play together with others at GJNV and remain persistent in their passionate pursuit of dignity and justice.

Early in 2016, they will celebrate 25 years together with their partner, without whom none of what has happened in their life would have been remotely possible.  They love their four dogs, breathe deeply on cool cloudy days and have an unshakable faith in trans, intersex and queer persons to take powerful roles in support of co-creating healing change in the world.